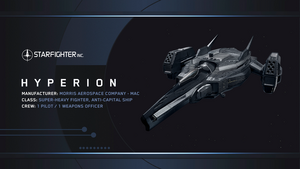 Hyperion is a heavy fighter ship.

strike fighter. During its long and illustrious career it has grown into an extremely powerful and capable

platform suitable for a variety of security and law enforcement missions. Thanks to its advanced design,

the Hyperion can be quickly tailored for toles as diverse as escort, space superiority, surveillance, drone

operations, cyber and electronic warfare, and even a “battle rider” configuration allowing it to carry two

light fighters in place of the main weapon pods.